For centuries humankind has relied upon various plants and animals to
provide the raw materials for fabrics and clothing. Silkworms, sheep,
beaver, buffalo deer, and even palm leaves are just some of the natural
resources that have been used to meet these needs. However, in the last
century scientists have turned to chemistry and technology to create and
enhance many of the fabrics we now take for granted.

There are two main categories of man-made fibers: those that are made from
natural products (cellulosic fibers) and those that are synthesized solely
from chemical compounds (noncellulosic polymer fibers). Rayon is a
natural-based material that is made from the cellulose of wood pulp or
cotton. This natural base gives it many of the characteristics—low
cost, diversity, and comfort—that have led to its popularity and
success. Today, rayon is considered to be one of the most versatile and
economical man-made fibers available. It has been called “the
laboratory’s first gift to the loom.”

In the 1860s the French silk industry was being threatened by a disease
affecting the silkworm. Louis Pasteur and Count Hilaire de Chardonnet were
studying this problem with the hope of saving this vital industry. During
this crisis, Chardonnet became interested in finding a way to produce
artificial silk. In 1885 he patented the first successful process to make
a useable fiber from cellulose. Even though other scientists have
subsequently developed more cost-effective ways of making artificial silk,
Chardonnet is still considered to be the father of rayon.

For the next forty years this material was called


by the Federal Trade Commission (FTC). The term


at this time included any man-made fiber made from cellulose. In 1952,
however, the FTC divided rayons into two categories: those fibers
consisting of pure cellulose (rayon) and those consisting of a cellulose
compound (acetate).

By the 1950s, most of the rayon produced was being used in industrial and
home furnishing products rather than in apparel, because regular rayon
(also called

fibers were too weak compared to other fibers to be used in apparel.
Then, in 1955, manufacturers began to produce a new type of
rayon—high-wet-modulus (HWM) rayon—which was somewhat
stronger and which could be used successfully in sheets, towels, and
apparel. The advent of HWM rayon (also called

is considered the most important development in rayon production since
its invention in the 1880s.

Today rayon is one of the most widely used fabrics in our society. It is
made in countries around the world. It can be blended with natural or
man-made fabrics, treated with enhancements, and even engineered to
perform a variety of functions.

Regardless of the design or manufacturing process, the basic raw material
for making rayon is cellulose. The major sources for natural cellulose are
wood pulp—usually from pine, spruce, or hemlock trees—and

To make rayon, sheets of purified cellulose are steeped in caustic
soda, dried, shredded into crumbs, and then aged in metal containers
for 2 to 3 days. The temperature and humidity in the metal containers
are carefully controlled.

After ageing, the crumbs are combined and churned with liquid carbon
disulfide, which turns the mix into orange-colored crumbs known as
sodium cellulose xanthate. The cellulose xanthate is bathed in caustic
soda, resulting in a viscose solution that looks and feels much like
honey.

cotton linters. Cotton linters are residue fibers which cling to cotton
seed after the ginning process.

Strictly defined, rayon is a manufactured fiber composed of regenerated
cellulose. The legal definition also includes manufactured fibers in which
substitutes have not replaced more than 15 percent of the hydrogens.

While the basic manufacturing process for all rayon is similar, this
fabric can be engineered to perform a wide range of functions. Various
factors in the manufacturing process can be altered to produce an array of
designs. Differences in the raw material, the processing chemicals, fiber
diameter, post treatments and blend ratios can be manipulated to produce a
fiber that is customized for a specific application.

Regular or viscose rayon is the most prevalent, versatile and successful
type of rayon. It can be blended with man-made or natural fibers and made
into fabrics of varying weight and texture. It is also highly absorbent,
economical and comfortable to wear.

Regular viscose rayon does have some disadvantages. It’s not as
strong as many of the newer fabrics, nor is it as strong as natural cotton
or flax. This inherent weakness is exacerbated when it becomes wet or
overexposed to light. Also, regular rayon has a tendency to shrink when
washed. Mildew, acid and high temperatures such as ironing can also result
in damage. Fortunately, these disadvantages can be countered by chemical
treatments and the blending of rayon with other fibers of offsetting
characteristics.

While there are many variations in the manufacturing process that exploit
the versatility of the fiber, the following is a description of the
procedure that is used in making regular or viscose rayon.

Regardless of whether wood pulp or cotton linters are used, the basic raw
material for making rayon must be processed in order to extract and purify
the cellulose. The resulting sheets of white, purified cellulose are then
treated to form regenerated cellulose filaments. In turn, these filaments
are spun into yarns and eventually made into the desired fabric.

The process for manufacturing high-wet-modulus rayon is similar to that
used for making regular rayon, with a few exceptions. First, in step #1
above, when the purified cellulose sheets are bathed in a caustic soda
solution,

After the syrupy viscose solution is prepared, it is forced through a
spinneret into an acid bath. The resulting strings or filaments are
then stretched on godet wheels to strengthen them and put into a
spinning Topham box. This method produces cake-like strings of rayon,
which are washed, rinsed, and dried before being wound on spools or
cones.

As with most chemically oriented processes, quality control is crucial to
the successful manufacture of rayon. Chemical make-up, timing and
temperature are essential factors that must be monitored and controlled in
order to produce the desired result.

The percentages of the various fibers used in a blended fabric must be
controlled to stay within in the legal bounds of the Textile Fiber
Identification Act. This act legally defines seventeen groups of man-made
fibers. Six of these seventeen groups are made from natural material. They
include rayon, acetate, glass fiber, metallics, rubber, and azion. The
remaining eleven fabrics are synthesized solely from chemical compounds.
They are nylon, polyester, acrylic, modacrylic, olefin, spandex, anidex,
saran, vinal, vinyon, and nytril.

Within each generic group there are brand names for fibers which are
produced by different manufacturers. Private companies often seek patents
on unique features and, as could be expected, attempt to maintain legal
control over their competition.

As one of the industry’s major problems, the chemical by-products
of rayon have received much attention in these environmentally conscious
times. The most popular method of production, the viscose method,
generates undesirable water and air emissions. Of particular concern is
the emission of zinc and hydrogen sulfide.

At present, producers are trying a number of techniques to reduce
pollution. Some of the techniques being used are the recovery of zinc by
ion-exchange, crystallization, and the use of a more purified cellulose.
Also, the use of absorption and chemical scrubbing is proving to be
helpful in reducing undesirable emissions of gas.

The future of rayon is bright. Not only is there a growing demand for
rayon worldwide, but there are many new technologies that promise to make
rayon even better and cheaper.

For a while in the 1970s there was a trend in the clothing industry toward
purely synthetic materials like polyester. However, since purely synthetic
material does not “breath” like natural material, these
products were not well received by the consumer. Today there is a strong
trend toward blended fabrics. Blends offer the best of both worlds.

With the present body of knowledge about the structure and chemical
reactivity of cellulose, some scientist believe it may soon be possible to
produce the cellulose molecule directly from sunlight, water and carbon
dioxide. If this technique proves to be cost effective, such hydroponic
factories could represent a giant step forward in the quest to provide the
raw materials necessary to meet the world wide demand for man-made fabric.

Smith, Emily T. “A Safe Shortcut around the Toxic Road to
Rayon.”

Templeton, Fleur. “From Log to Lingerie in a Few Easy
Steps.”

“Turning Corn and Paper into Rayon.”

How old is my appliance? Age finder, date of manufacture code decryption help for your appliances

Sun Mar 14 , 2021
How old is my appliance? Homeowners are often curious of the age of their home appliances. We have provided this service to try to help them to date their major appliances (fridge, stove, dishwasher, washer, dryer, etc.) accurately from the code usually contained within their serial number. Unfortunately only modern […] 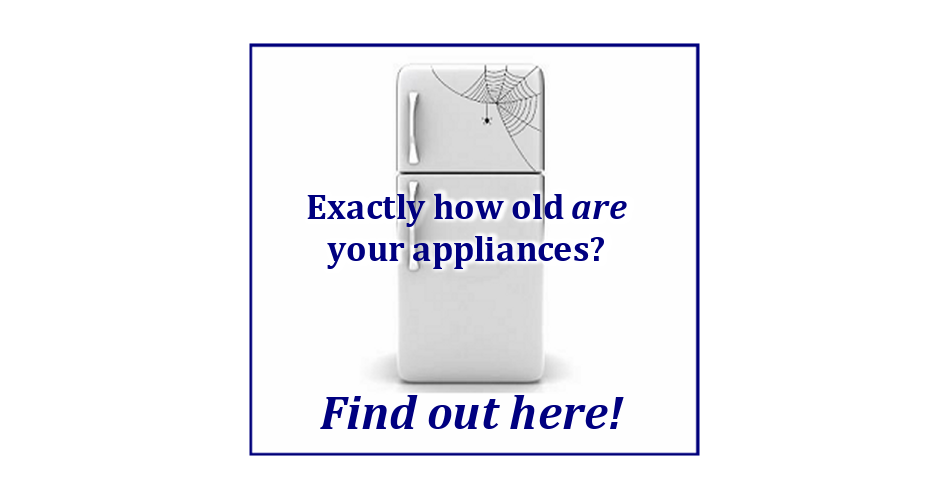